What to Visit / Barcelona

The relationship between Antoni Gaudí, master architect and creator of some of the most important works of Catalan modernism and Eusebi Güell, businessman, politician and genuine patron of Gaudí’s works, dates back to 1878, the year when they first met after Güell visited the Universal Exposition in Paris. It was at this world fair where he discovered the spectacular display case that the architect designed for the glove maker Raimundo Comella, and this marked a turning point in history and Catalan modernist architecture. The long-standing collaboration between the two brought to life masterpieces such as Güell Palace, the Crypt at the Güell Colony, Güell Wineries, Güell Pavilions and, last but not the least, one of the most visited attractions in the country—Park Güell.

The history of Park Güell began in 1900, the year when Antoni Gaudí was commissioned by Eusebi Güell to design and create an exclusive housing development for wealthy families on a large estate owned by him, in an area that was popularly known as Muntanya Pelada (Bare Mountain). Its views of the sea and the city of Barcelona made it an unbeatable location. 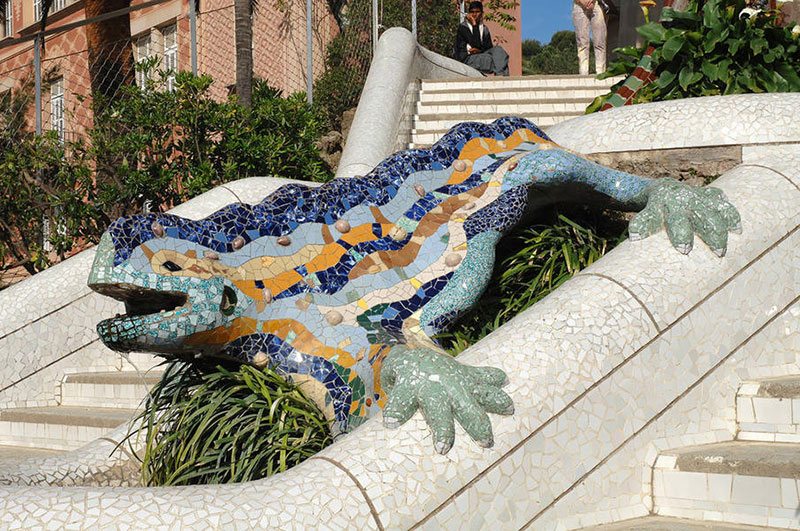 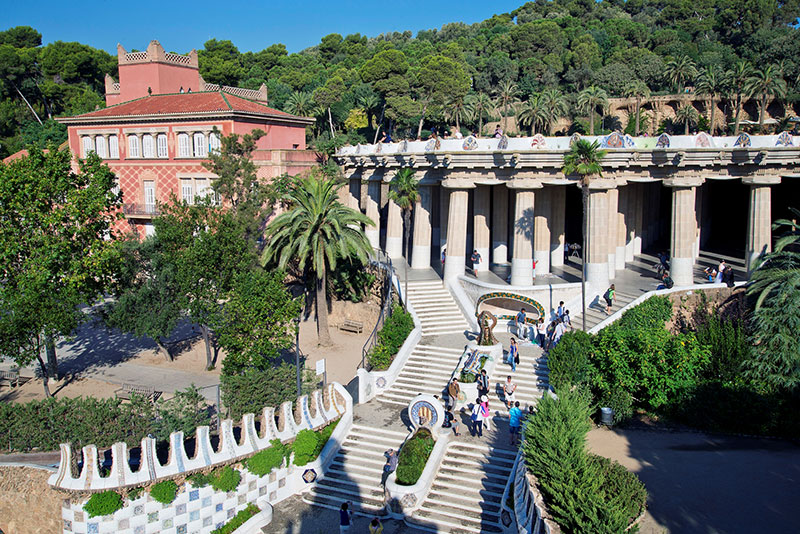 The original idea was to build some 60 triangular-shaped plots of land, with a complex network of paths, viaducts and stairs that criss-crossed the topography of the land. Gaudí’s patron wanted to recreate the British residential parks, which was why it was named Park Güell, in English.

For the project, Antoni Gaudí decided to conserve the original vegetation of olive and carob trees, while introducing some low-water-consuming species native to the Mediterranean. 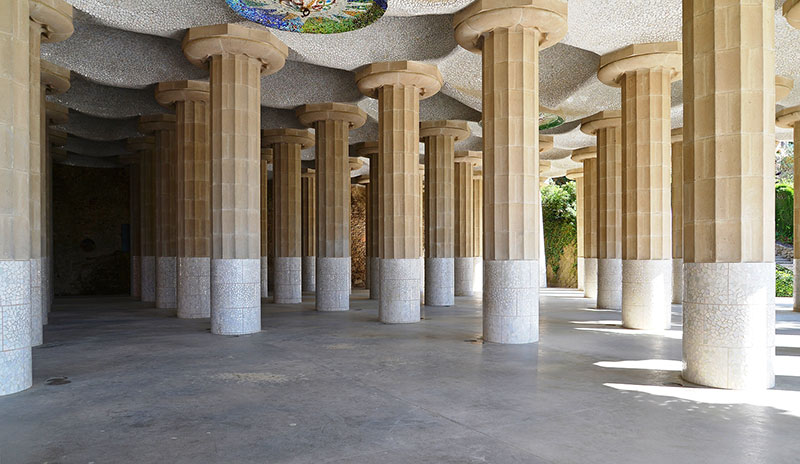 In October 1900, the works for Park Güell began, proceeding at a good pace. By January 4, 1903, the two pavilions at the entrance, the main flight of steps, the shelter for horse-drawn carriages, the outer fence, the viaducts and a part of the large esplanade, as well as the wastewater disposal system, had been completed. By 1907, it was already possible to hold events at the large square, with the Hypostyle Room completely covered; the tiled bench running around it was completed in 1914.

Martín Trias y Domènech, lawyer and friend of the Güell family, was the first to purchase a plot of land in Park Güell in 1902. He commissioned Juli Batllevell with the construction of his home. In 1906, Gaudí moved there with his father and niece, and a year later, Eusebi Güell took up permanent residence in Casa Larrard, the old manor house that already stood there when he acquired the land to build the housing development. 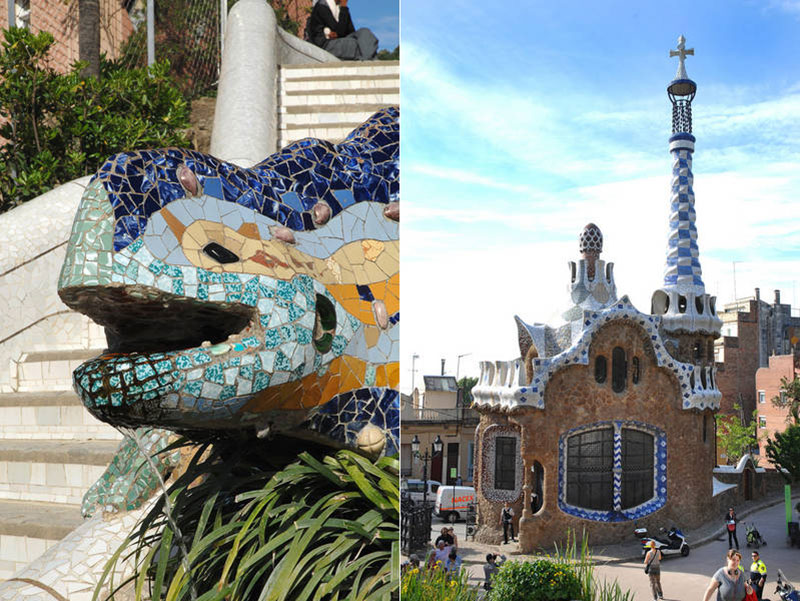 The difficulties in the conditions of sale for the plots of land forced them to abandon the works in 1914. After the Barcelona City Council bought the complex, in 1926, it became a municipal park, and it went on to become one of the city’s main tourist attractions—a magical and inspiring place that is definitely well worth a visit. It was declared a Historical-Artistic Monument of National Interest in 1969 and a World Heritage Site by UNESCO in 1984.
We at Eric Vökel Boutique Apartments highly recommend a visit to Park Güell; it is one of the visits that you absolutely can’t miss when in Barcelona. It’s your chance to see and discover one of the greatest masterpieces of this brilliant architect during his naturalist stage and to discover its hidden nooks, and spectacular constructions and designs. A few examples are the flight of steps with the famous salamander, the Hypostyle Room and its 86 magnificent columns, the Greek Theater or Nature Square, the Portico of the Washerwoman or the Austria Gardens, amidst paths and viaducts of great beauty and immense historical, cultural, landscape and architectural value. 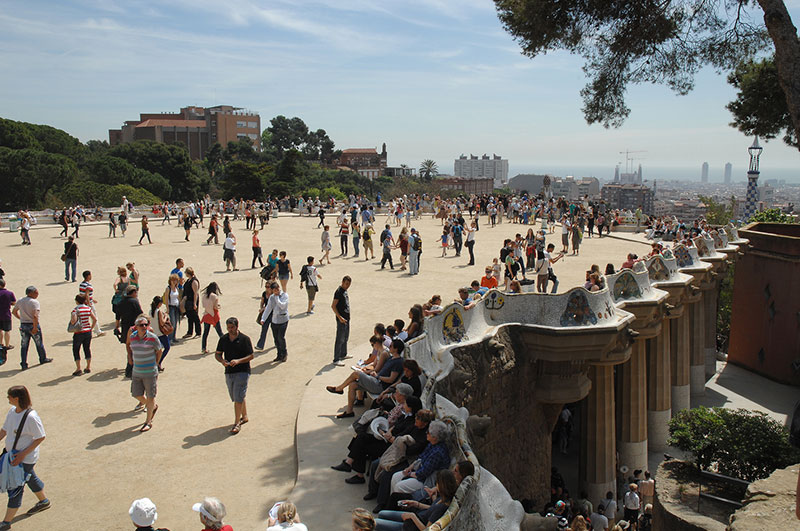 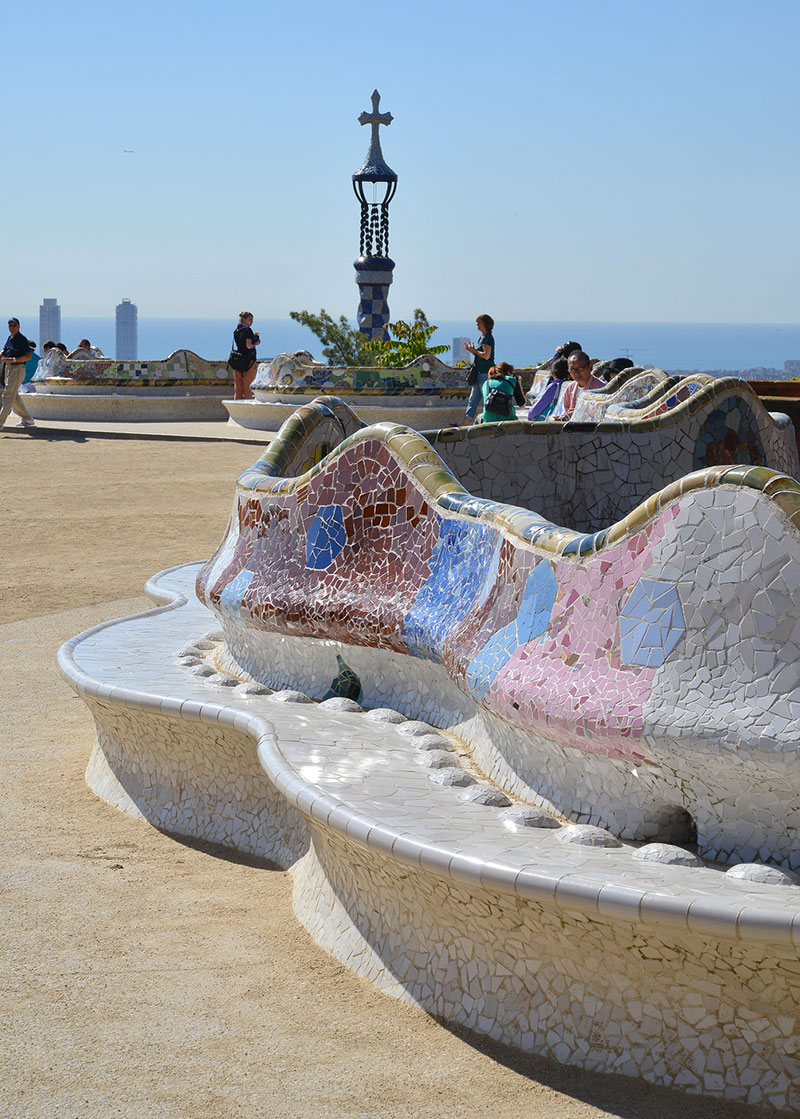 Park Güell is found on Carrer Olot in Barcelona. The most practical and convenient way to get to the Monumental Area is through three different entrances: the entrance on Carrer Larrard (main entrance), the entrance at Carretera del Carmel, 23, which happens to be where the parking for tourist buses is found, and the entrance on Passatge de Sant Josep de la Muntanya, which you can get to by riding the escalator up.

How to get there from one of the buildings of designer apartments and suites Eric Vökel Boutique Apartments:

It takes 26 minutes by public transport from Eric Vökel Bcn Suites at Grassot, 8 to Park Güell.

It takes 15 minutes by public transport from Eric Vökel Sagrada Familia Suites at Industria, 165 to get there.