Last November 16, Casa Vicens, the first project by the brilliant architect, involving the construction of his very first house, opened its doors to the public.

Located on a small street in the neighborhood of Gràcia, Casa Vicens lets you discover the different influences and ideas that Gaudí learned from his previous experiences, which culminated in this delightful single family home where construction and ornamentation seamlessly blend together. 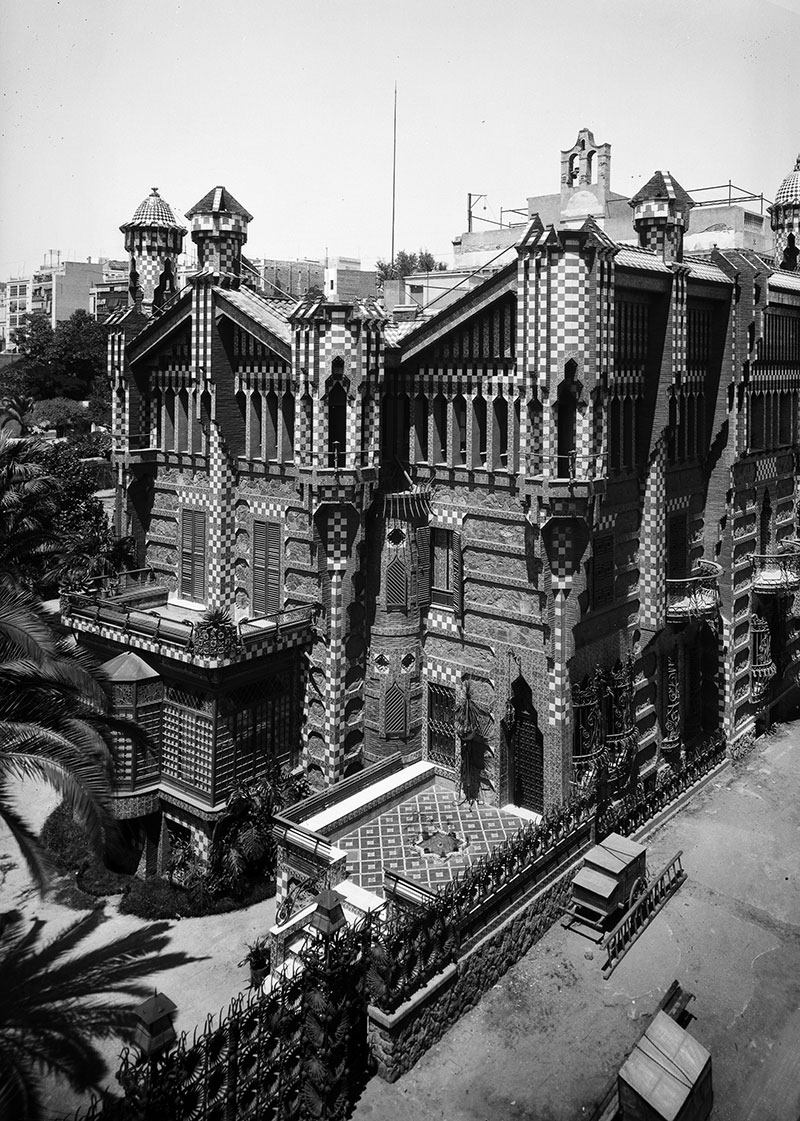 Casa Vicens was Gaudí’s first-ever commission, a prelude to all his subsequent architectural works, among which are Casa Batlló, La Pedrera, Sagrada Familia, Park Güell and many other masterpieces that are a veritable feast for the senses of any lover of modernism and architecture, turning Barcelona into Gaudí’s city. 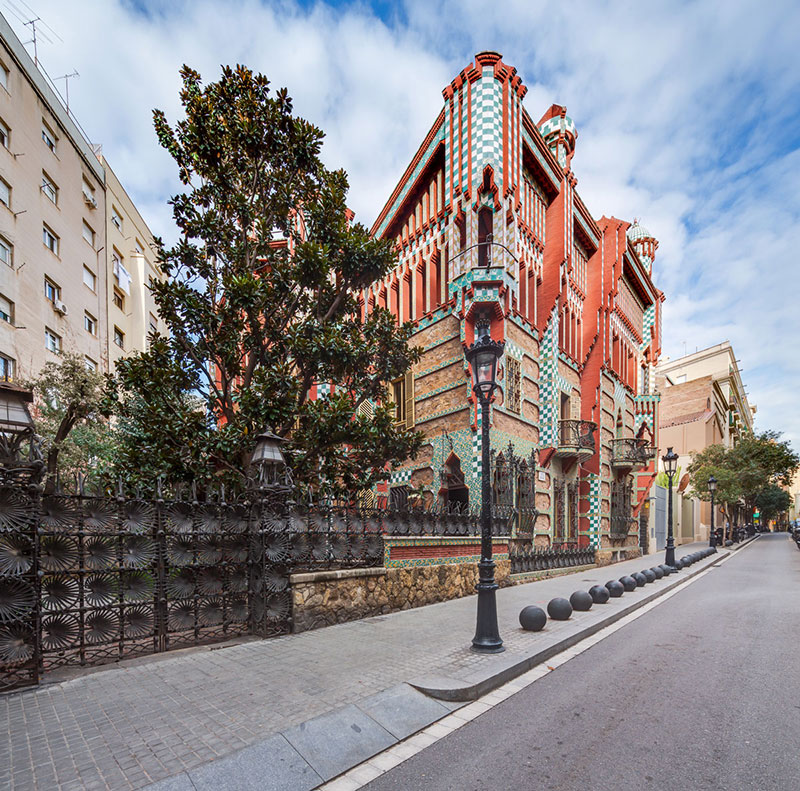 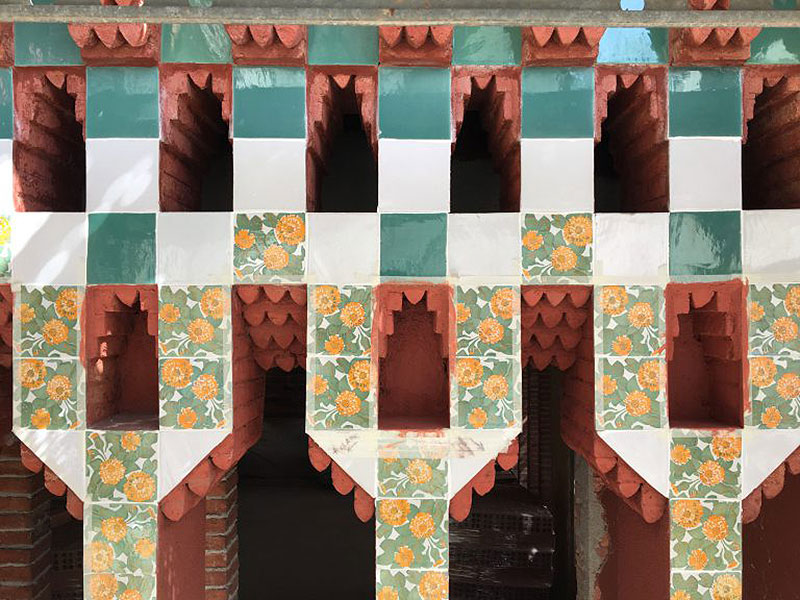 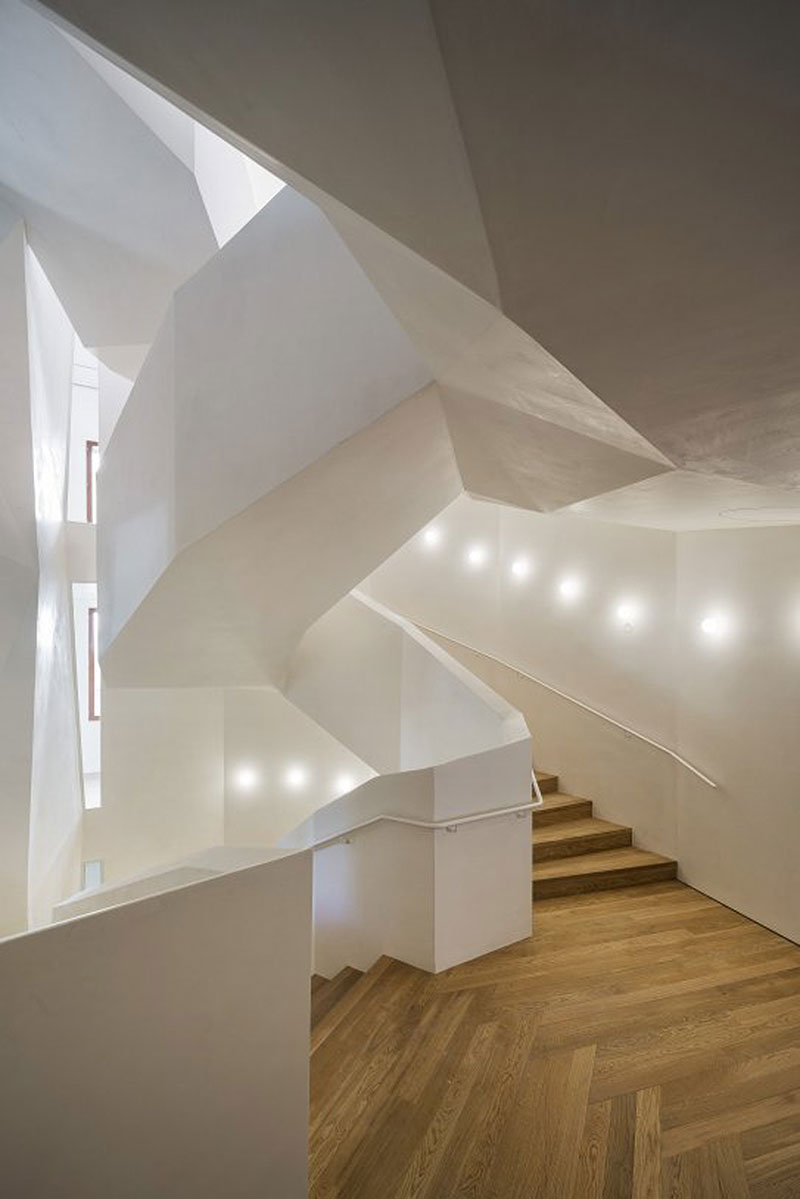 Manel Vicens i Montaner, a famous stock and currency broker, commissioned the young Gaudí to design his summer residence in 1883, after completing his studies at the Higher Technical School of Architecture of Barcelona, where he graduated from only five years ago.

The original project and its construction are found on a large plot of land with splendid gardens that, after several transformations and changes throughout its history of more than a century, comprise the current masterpiece. It is divided into three differentiated spaces: Gaudí’s original idea, which was carried out from 1883 to 1885, the expansion carried out in 1925 by Joan Baptista Serra de Martínez—architect and decorator born in 1888—, and lastly, the garden surrounding this fabulous house.

It has taken more than two years of restoration work to bring the house back to its former glory and to turn it into a museum. Utmost care was taken to keep the areas designed by the world-famous Catalan architect completely intact. 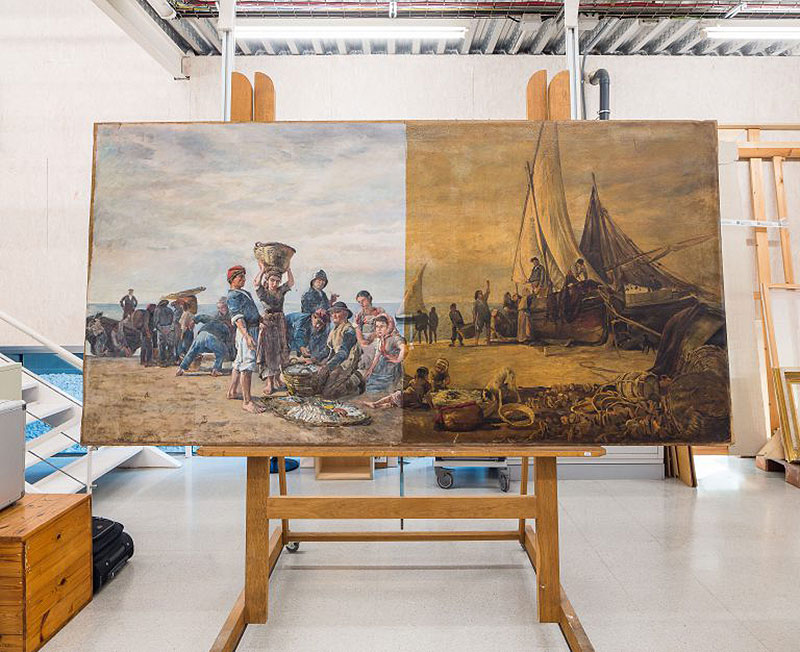 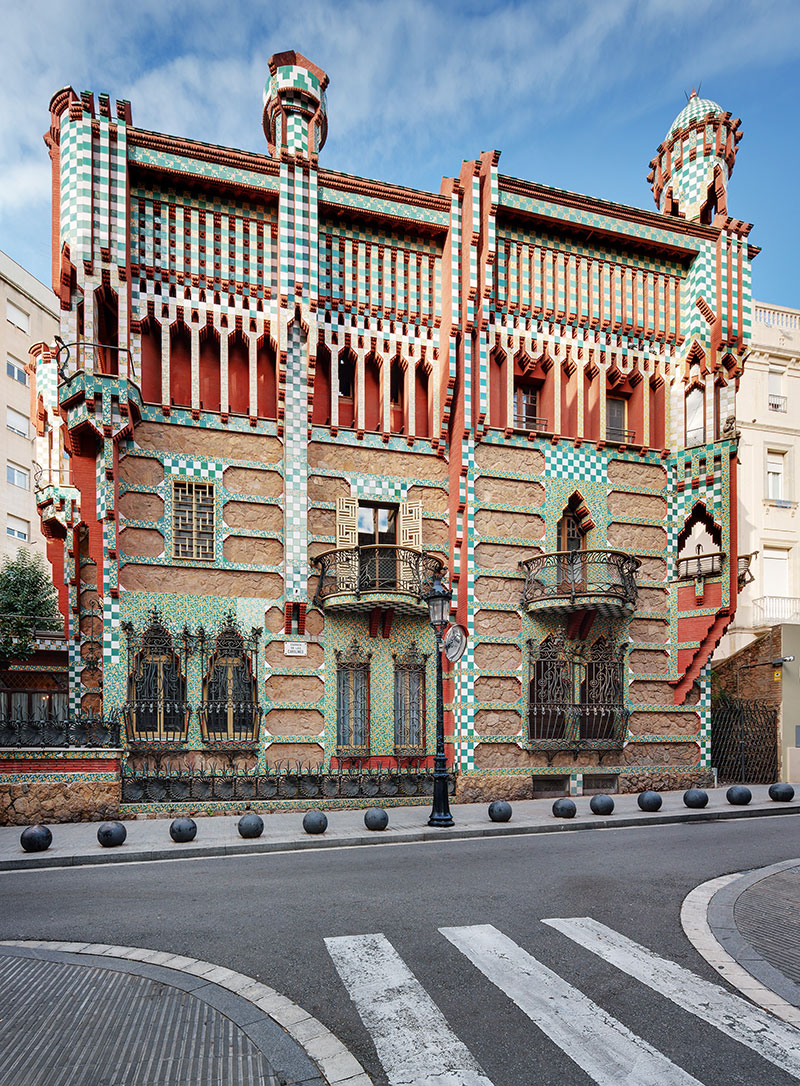 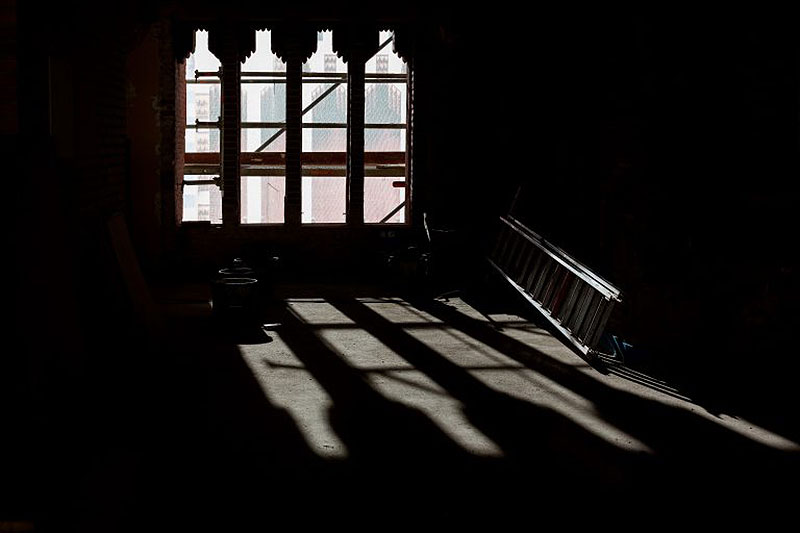 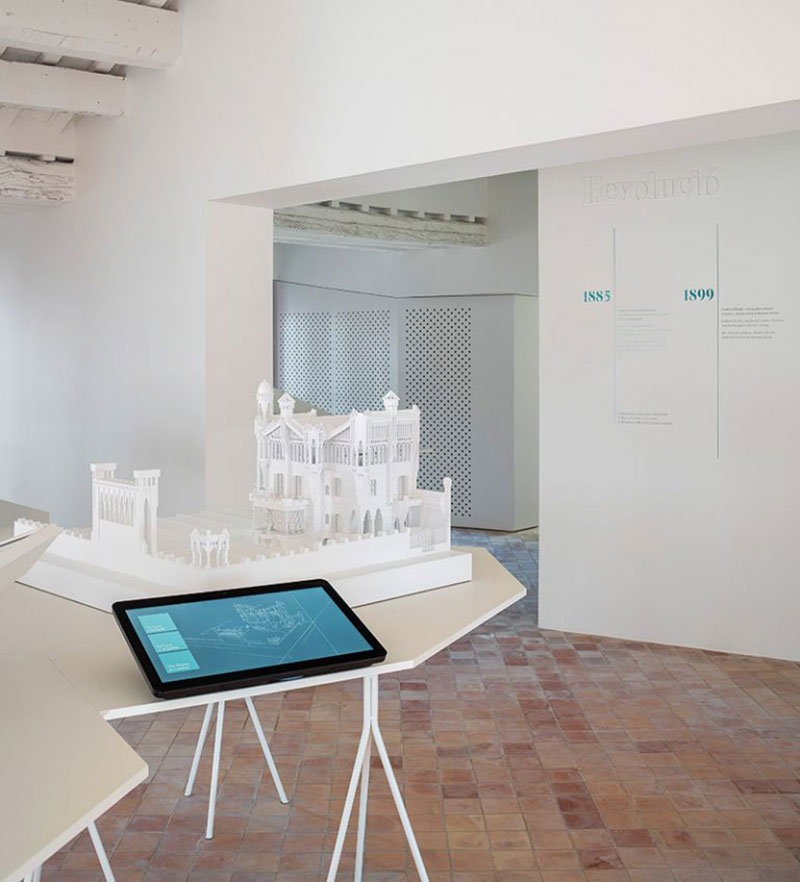 A welcome area for visitors is found on the ground floor, where they can immediately enjoy Gaudí’s spectacular construction and ornamentation work. On the first and second floors, there are halls with permanent exhibits on the building, as well as temporary exhibits and other activities that are part of the museum project. In the basement, you can find La Capell specialty store/bookstore and in the garden, the Café Hoffman dining outlet and the alcove where the image of Saint Rita—which came from a small shrine built in 1927 and which no longer exists today—is found. In this way, it is possible to continue holding a mass every May 22 in honor of Saint Rita and the blessing of roses, a tradition that is part of the history of the house and the neighborhood of Gràcia.

It was on the main floor where the daytime living spaces were found: a central dining room, located around a splendid covered porch, a smoking room and the foyer. Gaudí drew inspiration from oriental influences for the smoking room, which was designed as a space for leisure and introspection. Its ceiling is made up of a structure of polychrome plaster muqarnas reproducing palm leaves with clusters of dates, and its wall coverings are made of papier mâché tiles with their original polychrome finish in greens, blues and golds. Under the papier mâché tiles, forming the wainscoting of the room, the wall is covered with alternating ocher and sky blue tiles, with yellow and red roses painted in oil above them. 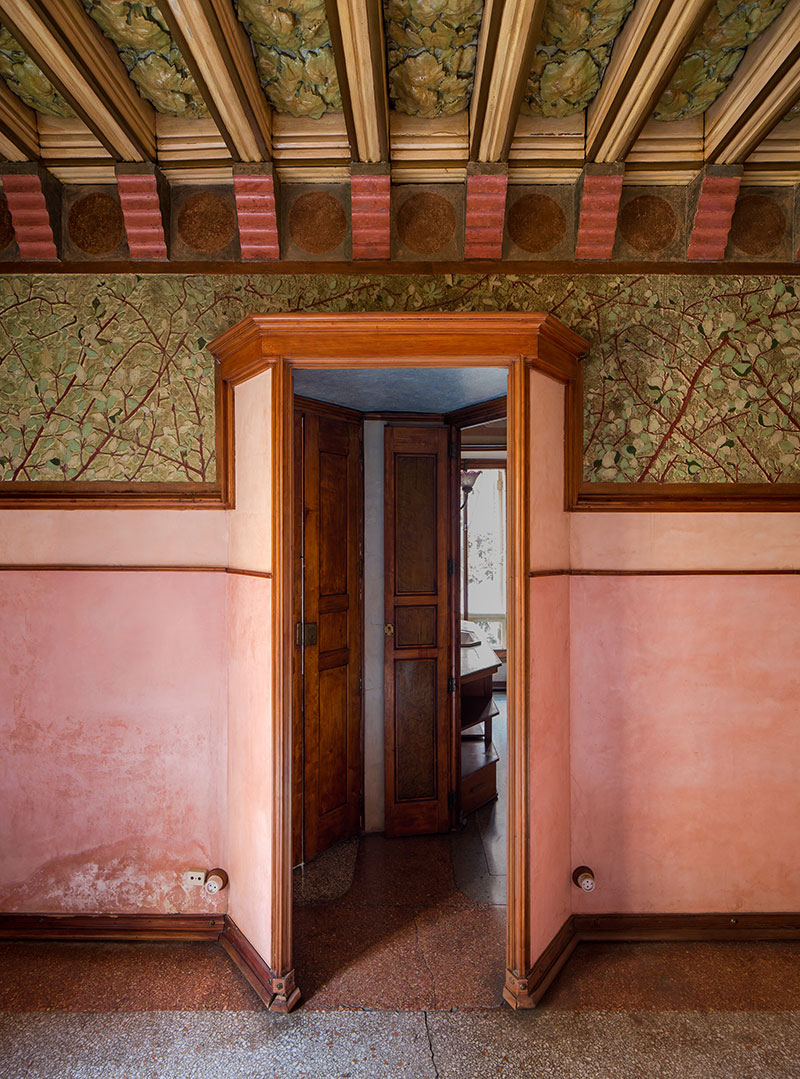 The dining room is, without a doubt, the pièce de résistance of Casa Vicens. Its original furniture was designed by Gaudí himself, and it holds a collection of 32 paintings by Francesc Torrescassana. Its walls and ceilings are adorned with vegetable ornamentation and its fireplace is covered with ceramic tiles, constituting a work of art in itself.

The private rooms of the Vicens family can be found on the first floor, with two bedrooms, the bathroom and a living room. The sgraffito with vegetable motifs, full of symbolism, dominate and permeate the different rooms—a prelude to Gaudí’s universe. 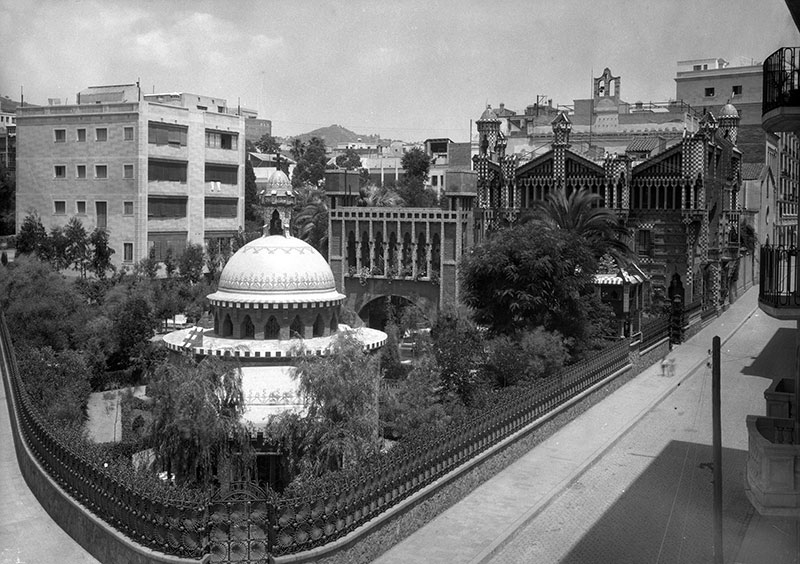 At Casa Vicens, Gaudí created his first accessible rooftop, an exceptional vantage point with a walkway around the four sides of the pitched roof, with curved roof tiles that made it possible to collect water.

The garden as it is today remains faithful to how Gaudí originally conceptualized it and to the gardens of the time. Particular emphasis is given to Mediterranean flora and fauna, which is reflected in the ornaments found inside the house.

The second floor, located right under the roof, is where you’ll find the permanent exhibit of Casa Vicens. Its contents will give visitors a general overview of what they’ll see during the visit.

Without a doubt, Casa Vicens has become one of the not-to-be-missed monuments in the city of Barcelona—the cradle of Catalan modernism.

It takes 23 minutes by public transport from Eric Vökel Sagrada Familia Suites at Industria, 165 to get there.